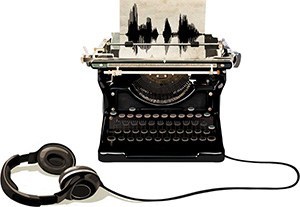 Void in MD, ND, AZ and CT and where prohibited by law.

(a) To enter, simply visit the website at http://www.portablestoryseries.com (the “Site”) and fully complete the form on the Submission page. Please also pay your submission fee of $10.00. Once the entry form and story (the “Manuscript”) have been received, a confirmation email will be sent to the e-mail address you provide.

All Manuscripts submitted: (i) must be original, Previously Unpublished (as defined below) works no more than 4,500 words and no less than 2,500 words written in the English language by the entrant; (ii) must not violate any right of any third party; (iii) must be available to be exclusively recorded and distributed by CDM Sound Studios, Inc. (“Sponsor”); and (iv) must not be inappropriate, indecent, obscene, racist, hateful, tortious, defamatory, slanderous or libelous, as determined by Sponsor in its sole discretion. For the purpose of this Competition, “Previously Unpublished” means that the Manuscript has not been published or distributed, in part or whole, in paper or electronic format or in any other medium, including self-published works. The decision of the Competition’s judges as to whether or not a Manuscript qualifies for entry will be final and binding in all respects. In the event an insufficient number of qualified entries are received, Sponsor reserves the right to cancel or modify the Competition.

(d) Competition begins August 7th, 2017 at 10:00 a.m. Eastern Time (“ET”) and all online entries and manuscripts must be received by September 29th, 2017 at 11:59 p.m. ET. All entrants must have a valid email address. In case of dispute as to identity of entrant, entry will be declared made by the authorized account holder of the email address submitted at time of entry. “Authorized Account Holder” is defined as the natural person who is assigned an email address by an Internet access provider, online service provider, or other organization (e.g., business, educational, institution, etc.) responsible for assigning email addresses or the domain associated with the submitted email address. Any other attempted form of entry is prohibited; no automatic, programmed; robotic or similar means of entry are permitted. Sponsor, its parent companies, subsidiaries, affiliates, partners and promotion and advertising agencies are not responsible for technical, hardware, software, telephone or other communications malfunctions, errors or failures of any kind, lost or unavailable network connections, website, Internet, or ISP unavailability, unauthorized human intervention, traffic congestion, incomplete or inaccurate capture of entry information (regardless of cause) or failed, incomplete, garbled, jumbled or delayed computer transmissions which may limit one’s ability to enter this Competition, including any injury or damage to participant’s or any other person’s computer relating to or resulting from participating in this Competition or downloading any materials in this Competition.

By submitting a Manuscript, Finalists (as defined below) grant to the Sponsor a non-exclusive license to the Manuscript solely for purposes of the Competition including the non-exclusive right to display portions of the text (paragraphs, sentences or phrases) extracted from the Manuscript (but not rearranged from their original form) to promote the author’s work and the Sponsor on the Sponsor’s website and on its social media accounts. In addition, by entering, the Grand Prize Winner (as defined below) grants to Sponsor the non-exclusive license to record an audio version of the Manuscript (the “Recording”) and offer it to the public as a free download on the Sponsor’s website, as well as the right (x) to sell the recording to a third party, or (y) as part of an as-yet-undefined compilation in a sale to the public, provided that, in each case, the proceeds benefit a charity or charitable purpose. No profit from the sale of the recording shall be collected by the Sponsor without prior agreement with the author (defined further below). Subject to this license, (i) all right, title and interest in and to the Recording shall be owned by Sponsor, and no entrants shall have any rights in or to the Recording, and (ii) all right, title and interest to the Manuscript shall be retained by each entrant. The specifics of these license are more fully set forth in Section 2(c).

3. Judging: On or about 9/29/2017 all eligible entries received will be judged by Sponsor on the basis of the adherence to the theme, creativity and writing skill, with equal weight given to each criteria. The six (6) top entries will be deemed to be finalists (the “Finalists”) (the actual number of Finalists may be less if there are an insufficient number of qualified entries). On or about 10/31/2017 all eligible Finalists will be judged by Sponsor based on the same criteria specified above in order to choose one (1) Grand Prize winner. The decisions of the judges with respect to the selection of the winner, and in regard to all matters relating to this Competition, shall be final. The winner will be notified by e-mail on or before 10/31/2017. Winner will be required to sign and return, where legal, an Affidavit of Eligibility and Liability/Publicity Release within seven (7) days of prize notification. If winner cannot be contacted or in the event of noncompliance with these rules and requirements, the prize will be forfeited and an alternate winner will be selected provided there is a sufficient number of qualified entries to do so. Upon prize forfeiture, no compensation will be given.

4. Eligibility: Employees, and members of their immediate families living in the same household, of Sponsor, its parent, subsidiaries, affiliates and their advertising, promotion and production agencies, are not eligible to enter. Void in the US states of MD, ND, AZ and CT and in other jurisdictions where otherwise prohibited by law.  Certain jurisdictions may prohibit or restrict your participation in this promotion so please check your local law to determine if this is applicable to you.

5. Prizes: The winning story will be recorded at CDM Sound Studios by a professional narrator chosen by Sponsor at its sole discretion; provided, however that Sponsor may elect to not record the winning story, in its sole discretion and instead provide the winner a cash alternative prize. $250, or 75% of the proceeds from story submission fees (whichever is greater), will be awarded to the Grand Prize Winner. A short promotional teaser video may be made of the narrator recording the story, as determined by Sponsor in its sole discretion. The winner will also receive a free uncompressed (44.1 16bit mono .wav file) copy of the audio recording of the winning story, if the recording is made. An mp3 file of the winning story will be available for free download by the public. The five remaining finalists will be listed on the Portable Story Series website. The authors’ names will be prominently displayed. Retail value of Grand Prize is $5500.00 plus $250, or 75% of the total collected submission fees (whichever is greater).

No cash substitution, transfers or assignments of prizes allowed. Winner agrees to provide a photo of him/herself and a short bio. By accepting prize, winner grants to Sponsor the right to use his or her entry, name, likeness, hometown, biographical information, photo and Interview in advertising and promotion in all media without further compensation or permission, except where prohibited by law. All expenses, including taxes, on the receipt and use of prizes are the sole responsibility of the winners. By entering the Competition and/or by accepting a prize, winner releases Sponsor, its parent, subsidiaries, affiliates, subsidiaries, suppliers, and agents from any and all liability for any loss, harm, damages, cost or expense, including without limitation claims in the nature of copyright infringement or libel, property damages, personal injury and/or death, arising out of participation in this Competition or the acceptance, use or misuse of the prize. If for any reason, (including infection by computer virus, bugs, tampering, unauthorized intervention, fraud, technical failures, or any other cause beyond the control of Sponsor, which corrupts or affects the administration, security, fairness, integrity, or proper conduct of this Competition), the Competition is not capable of being conducted as described in these rules, Sponsor shall have the right, at its sole discretion, to cancel, terminate, modify or suspend the Competition.

7. Winners’ List: For the name of the winner, email info@portablestoryseries.com